hess is a very special game. It has a charisma and is surrounded by an aura of intellectual elitism (in a good sense). Perhaps these days chess means less than what it used to a few decades ago, and chess world champions are less popular than local baseball stars. However, I remember the times when chess players were celebrities. I had chess classes in elementary school. There were chess clubs almost in every school. It wasn’t mandatory to take those classes, but many liked the game. My dad taught me chess when I was 6. Neighbours played chess for pleasure (and sometimes even for money) gathering around a checkerboard in common courtyards of high-rise buildings during warm summer nights. Not everybody was exceptionally good in chess, but the game was definitely among the most popular back then.

Why chess? Because for the Soviet Union of the Cold War era chess was much more than just a sport. Chess world championships were a question of national pride and a way to prove the superiority of the socialist state over the West. The political confrontation found its way to the checkerboard. Chess became a symbol of the political games, the pure visualization of the black and white world. Thus, the state needed excellent chess players and possible winners, thus great efforts were made to nurture ones. If anything good was ever made by the Soviets it is promoting chess.

The politics is (and always has been) dirty and ugly. Chess is a noble game even if it is politicized so strongly. The metaphor of the Cold War inspired Tim Rice to write the musical called Chess. Tim Rice invited Benny Andersson and Björn Ulvaeus, formerly of ABBA, to work on the musical. The three great talents created a masterpiece that immortalized the era of political chess. This is what Wikipedia tells about it:

“The story involves a politically-driven, Cold War-era chess tournament between two men—an American grandmaster and a Soviet grandmaster—and their fight over a woman who manages one and falls in love with the other. Although the protagonists were not intended to represent any real individuals, the character of the American grandmaster (named Freddie Trumper in the stage version) was loosely based on Bobby Fischer, while elements of the story may have been inspired by the chess careers of Russian grandmasters Viktor Korchnoi and Anatoly Karpov.”

I personally like the version where Josh Groban plays Anatoly Sergievsky, The Russian.

I think I should attribute my intellectual curiosity and academic success to chess. I don’t play chess anymore, but I still like this game. I’m a bit nostalgic about the times when politics was made with chess, not tanks.

Here is some chess vocabulary for you:

To finish this talk about chess, I wanted to boast a bit: My husband and I, the children of the late Soviet Union, designed a few t-shirts to celebrate chess and praise human playing mind. Lovely, aren’t they? 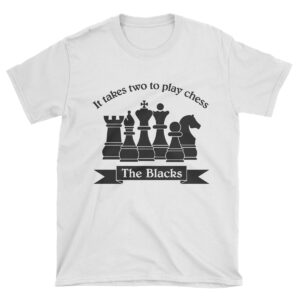 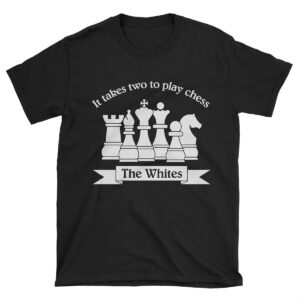 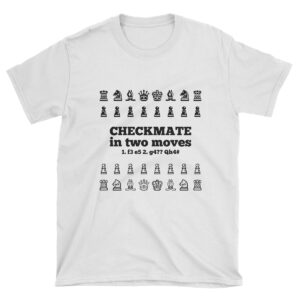 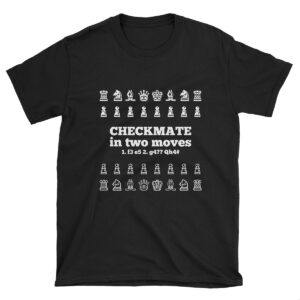