Up until recent times, personal automobiles have been rare in the Soviet Union. The principal mode of suburban transport has been the elektrichka. Elektrichka is an informal word for an “electric multiple unit passenger train.” Though many people in the Post-Soviet Russia drive personal cars, the electrichka is still very popular today. Designed to carry as many people as possible for relatively short distances, the elektrichka is a train with a modest level of comfort: simple benches, each seating three, in rows abutting the windows. According to Wikipedia, there were 4085 commuter trains a day running in each direction on the Russian Railways network in 2007, most of them being electric trains.

From early April to late November, the elektrichka is occupied with “dachniki”, or dacha owners. They always carry large, heavy bags. In the springtime, dachniki bring along tools and garden supplies with them when moving out to their dachas. In the fall, they bring back their harvest of vegetables and berries from the dachas to their homes. Fishermen are also frequent passengers of the elektrichka. Fishermen carry heavy backpacks, wear rubber boots, and smell like smoke because when fishing, they light fires in order to boil water and generate warmth when it gets chilly. From September to May, students living in suburban towns use the elektrichka to get back and forth from their schools and universities. Often people from small towns are unable to find a job at the local market and find employment in a larger city nearby. They use elektrichka every day to get to their offices and back. Thus elektrichkas are critically important to social life. A typical fare by elektrichka from my hometown Zarinsk to Barnaul (over 100 km) costs 90 rubles or 3 dollars. 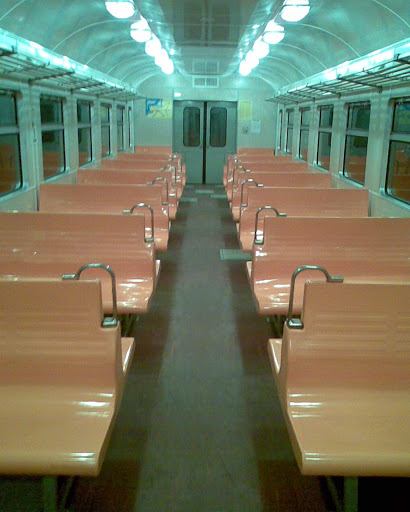 Unlike any other public transportation, elektrichka has a very particular atmosphere filled with informal, relaxed chitchat. When it takes you two hours to reach your point of destination, the best way to entertain yourself is a talk. Quite often I see fishermen or tourists eating and sharing their camp food with each other while going back to the city. Sometimes, people play cards to make a long trip shorter. I noticed that students and youngsters tend to isolate themselves with iPods and smartphones when traveling, while older people prefer to communicate with each other face-to-face. For linguists, the elektrichka is an inexhaustible source of new ideas about what is going on with the language in a society.

In the 1960s, there was a popular song about a young man who was dating a girl and missed the last elektrichka, so he had to walk along the railway tracks all the way back home. My father told me that he once followed the railway track on the way home when dating my mother. This song was very popular at the time, and my dad sang it the whole way home, feeling as if the song was composed just for him.