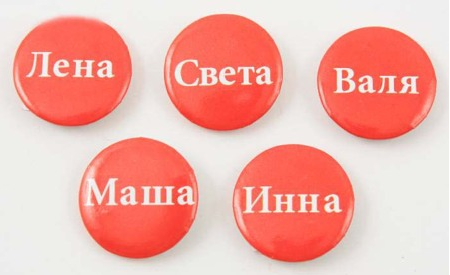 Like in many other languages, Russian names have two forms — a full name for official communication and a diminutive or affectionate name for family and close friends. Usually, it is easy to form a diminutive form out of the full name. Thus, when you get into a person’s intimate circle, Elena turns to Lena, Natalia to Natasha, Maria to Masha, Tatyana to Tanya, Dmitriy to Dima, Pyotr (Peter) to Petya, Vasiliy to Vasya, and so on. However, some names have more than one diminutive form.

I think, I won’t be too wrong if I say that the absolute champion is Georgiy (George). There are a few variants for the full form for Georgiy, like Igor, Yuriy and Egor, and a number of diminutives — Gosha, Zhora, Garik, Goga, Yura… I’m afraid, I can not even recall all possible variants of this name.

Alexander (Александр) may also choose a short name from Sasha or Shura (Шура) or Sanya (quite informal) or Alex (if he wants to sound cool).

Though the short name for Maria is Masha, it can also be Marusya or Manya. Today, Marusya and Manya sound a bit outdated, but they are still in use, particularly within a family, say, parents can call their daughter Marusya. Lyudmila can be Lyuda, Lyucia or Mila.

Slavonic names ending in -slav make a great mess. When you meet a guy named Slava, you never know if he is Vyacheslav, Yaroslav, Vladislav or any other -slav. The ending -slav means “glory” and the first part of these names indicates the subject of the glory — Vyacheslav means a great glory, Yaroslav means a glory to the Sun (to a Slavonic pagan god Yarilo, personifying the Sun) and so on.

Sometimes, diminutives have little or nothing in common with their full forms:

When to use short/diminutive names? This is very similar to Вы/ты (you formal and you informal) problem. Maybe it’s OK to call a boss of Microsoft Bill, but it is definitely not OK in Russia to call a boss or just an unfamiliar person by a short name. Using the short name means voluntary equality. Often a person may offer to let you call him or her by a short name. This is a sign that your social distance is shortening. If you feel that you have developed friendship with somebody, you may ask if this person wouldn’t mind being called by a short name. Some of my English-speaking and German-speaking colleagues have become my very good friends, but they call me Eugenia, and every time I feel like they are keeping their distance instead of getting closer. Well, maybe I just should tell them that they may call me Zhenya.

If you are interested in learning Russian, I would suggest starting with the New Penguin Russian Course.

How to Deal with Long Russian Words